How Lutron Features Can Contribute To Energy Efficiency In Your Home 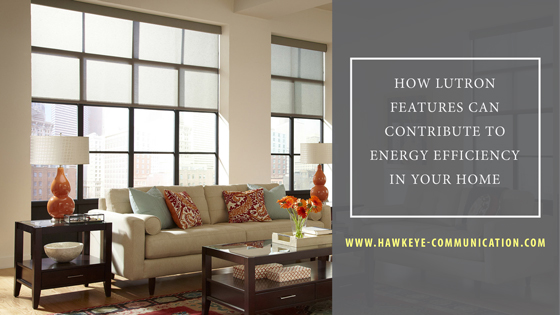 Established in the late 1950’s, Lutron Electronics was the brainchild of inventor Joel Spira, who along with his wife, founded the company on the basis of producing and selling the modern dimmer. Before, lights only had “on” and “off” switches, but no in-between. Besides making this middle adjustment, Lutron has also pioneered a change in the lighting industry that has benefited both homeowners and workers alike, in terms of being able to turn on and be satisfied with the light gradient in the room. In this article, we will give you a few reasons why Lutron’s dimmer is not only good for home safety, but also for energy efficiency. Without further ado, let’s get enlightened!

Defined as an accumulation of greenhouse gas emission caused by humans and products, the carbon footprint is an undesirable feature to have, especially with the growing effects of global warming and other phenomena most likely due to our impact on Earth since the beginning of time. Lighting is a possible contributor to this issue, and so by using a light controller such as the dimmer, it can cut carbon footprints tremendously, depending on how much you turn on and dim the lights on a daily basis. From there, it can slow down greenhouse gas emission, and help to improve the Earth once more.

It is common sense: the less energy you use, the more you save. While “on-and-off” switches require paying the full money’s worth or none, the modern dimmer can help you cut that cost by as much as 40 percent if it is turned down to fifty percent of its capacity. Even better, you can extend the lightbulb’s life by up to 20 times more by doing this. That said, you can cut down having to pay on electricity bills while even getting some money back for your efforts!

You might not realize it, but the gradient of your light at home or work can affect your performance when it comes to everyday activities. If the light is too bright, its emissions can create eye strain, as well as headaches (and even potential migraines). That leads to a negative effect on health, and so by having a dimmer to adjust the environment to, you can find the best gradient for your comfort level.

Even further, having the right amount of lighting can increase productivity in the workspace, as well as at home. Modern dimmers have evolved to the point of adjusting not only to the environment outside of the window (i.e. whether it’s daytime or nighttime) but also to the inside. For instance, the room’s lighting when it comes to doing paperwork or other activities (e.g. reading, cooking, exercising) is different from that when technological items (televisions, computers, other electronic devices) are operating; the latter already has built-in lighting into it, and so using more than is needed can create tension between the device light and the room’s. Knowing just how much to use during these occasions will lead to a better environment.